In March 2011, we were working on a app, which should help tsunami victims to find their beloved belongings. It was a project within a startup weekend event in Cambridge. 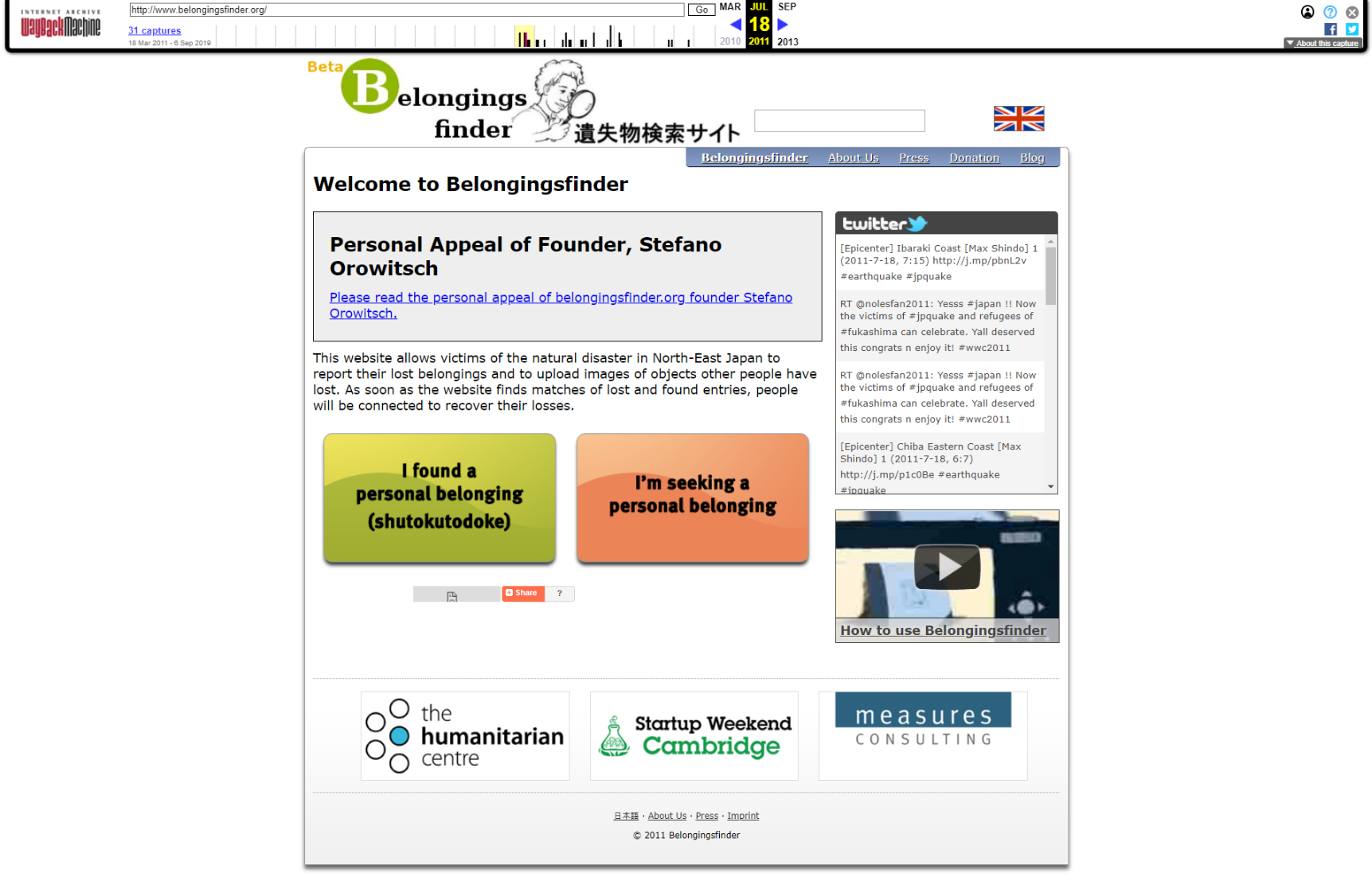 This website allows victims of the natural disaster in North-East Japan to report their lost belongings and to upload images of objects other people have lost. As soon as the website finds matches of lost and found entries, people will be connected to recover their losses.

This free of charge application can be used by relief organizations, individuals, governments and local communities to extend their reporting of found belongings online.

Stefano Orowitsch Team Leader
I will do the utmost possible so that many people find some solace, in spite of the devastation, in recovering treasured possessions, and in the goodness of their fellow men and women who have returned those possessions to themStefano is the project coordinator and has started working on belongingsfinder.org in immediate response to the earthquake. He formed a team which began software engineering only a few hours past the devastating earthquake. He is a Technology Policy post-graduate student at University of Cambridge and prior to that obtained a BSc from Rotterdam School of Management, Erasmus University, where he also co-founded StudentCar, a national car-rental service for students in The Netherlands. He has three years of working experience in various financial sectors and internet companies.
Nilay Saha Marketing, Project Manager
While at Leiden university I worked on Linux server administration and Image processing as part of my postgraduation study. I have worked as developer, architect, project and team lead and recently in marketing strategy group at ASM Lithography. I’m also doing charitable work for social organizations of India based in Netherlands. This experience for working for social welfare pulled me towards this project which addressed the needs of Japanese people.Nilay’s background is physics (he studied at Indian Institute of technology and Leiden University, Netherlands) and Computer science from TU Eindhoven. Currently he is pursuing MBA from Kellogg school of Management. Nilay is also responsible for backend developing.
Christian Rühringer Product Design
I was shocked when I saw the terrible pictures of Japan’s Tsunami aftermath the first time. A lot of these people have to begin their lives again. When Stefano told me about the idea of Belongingsfinder I directly joined to make this happen and help people with modern tools.Christian is an entrepreneur since 2008, he got a lot of Software Developing experiences including internet applications, game design and desktop tools. He was and is involved in many Startups in Berlin. Christian was also involved of early stage development of frazr (a german Twitter clone), Zalando (One of Germany’s biggest eCommerce Platforms) and worked together with investors of eBay Germany, Facebook and LinkedIn. Christian created the design of Belongingsfinder and is responsible for any improvement.
Finbarr Taylor Java Backend
Final year Computer Science student studying 5 year integrated Masters at Strathclyde University in Scotland. Finalist Young Software Engineer of the Year 2010 in Scotland. “Tactile Feedback for Predictive Text Entry” published CHI 2009. Runs own web development business and has worked with clients such as British Council Scotland and Scottish Arts Council (now Creative Scotland).
Wilhelm Laubach Marketing
I have many friends in Japan and I love the Japanese culture. When I heard about the earthquake and tsunami, I was pretty shocked. Immediately, I had an urge to help. Through this project I had a great opportunity to use my expertise and knowhow in order to help these people in need.Wilhelm has been an online entrepreneur since 2005. He had found two online companies Webskyline and Smart Internet Solutions UG. In the last few years he developed many different websites and optimized them for search engines.
Gary Rennie API, Server Administration
Computer Science graduate from Strathclyde University. After developing in PHP for nearly a decade, Gary recently switched to Ruby (and Rails.) His interests are scaling web applications, NoSQL and Threaded programming.
Siang Loong Koid (Chester) Business Support
Chester is a final year undergraduate in Electrical and Electronic Engineering with management studies at Imperial College London. In collaboration with Imagination Technologies, Chester had worked in a team on an object recognition system implemented on a portable hand-held device to be used as a visual aid for the visually impaired. Studies aside, he has previously worked in a telecommunications company, mainly involving product design and implementation planning of a GPS navigational device. With regards to the recent mishap in Japan, Chester hopes to alleviate the situation and help the victims regain their lives one step at a time.
Teng Ting Chow Market Research
Teng is a Mathematics graduate (BSc) of King’s College London who is currently pursuing business finance in BPP College of Professional Studies in London.. Enthusiastic and ever diligent in her work, she is in search of new avenues to apply her analytical skills in shaping the finance world. Endeavours aside, it is a rare opportunity to effectively execute a business model whilst offering to those in need. With the aid of modern technology, we can reachout to the far reaches of the globe with one aim; creating an opportunity for devastated victims to restore their sense of self by helping them in recouping their losses.

Peter Cowley Supporter
Peter is a Cambridge University Engineering/Computing graduate who has worked in Bavaria and the UK. Peter has owned and run technology and construction businesses for 30 years and has angel invested in start-ups in Cambridge, York and London. For over a decade, Peter has been involved in charity and social enterprise governance as chair and treasurer of various trustee boards. Peter is a board member of the Cambridge Angels, and has run mentoring schemes for many years. Peter has also setup and now runs the start-up investment fund of a major Cambridge corporate.
Chris Measures PR advice/mentoring
Chris has spent over 17 years working for international technology PR and marketing agencies. His experience ranges from major quoted companies to sector leaders and fast-growth/startup companies. Based in Cambridge, he focuses on PR, digital and marketing programmes for start-ups and software companies, particularly in and around Cambridge.
Mauro Ciaccio Supporter
After completing a PhD in Hydrological Modelling, I decided I much preferred software to wet hillslopes. I have been working in software for the past 13 years, covering the entire software life-cycle. Having moved to Cambridge, I caught the “start-up” bug, which led me to found the CamTechNet.info website. The main aim of the website is to aggregate information relevant to technology professionals, startups and SMEs in the Cambridge Cluster. I am also one of the founders of Cambridge Pitch & Mix, a meetup group aimed specifically at tech startups and SMEs. In 2011 I was the lead organiser of Cambridge StartupWeekend, the first event of it’s kind to be held in Cambridge.